It is a year to go today till the opening ceremony begins in Japan! I’m so thankful to everyone who has donated and helped me so far and I hope that in the next year I will get just as much incredible support as I have had so far!

I’m supposed to be on cool runnings however unlike the film, I’m anything but! I struggled through the Cawood to Barlby stage on Sunday, stiff joints were to blame for an incredibly slow 10k! We were also held up by having to negotiate a herd of cows and calves – mum was worried my red shorts might attract some unwanted attention but thankfully we crept past without causing a stir!

I am very thankful to our second ever running partner, Helen … for staying with us and not running off and leaving me for dust! Note to self: Get training for next run. Even more grateful to her for the delicious chocolate cake we were treated to afterwards – a very welcome sight – thanks Helen! 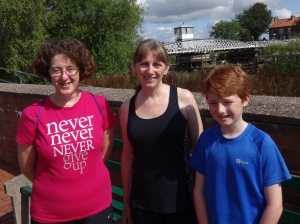 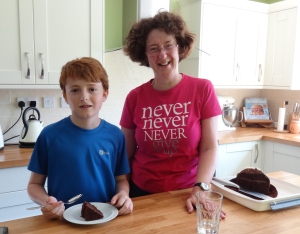 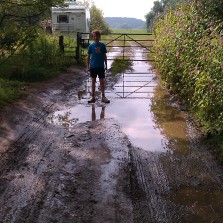 On Sunday me and my mum jumped into the car, excited for another normal run, or so we thought…

Leaping out and running at a decent pace, we thought we would make light work of the course from Bishopthorpe to Acaster Selby but this was not to be. As we left Acaster Malbis, the sun came out, it was HOT and HUMID 😦 there was mud everywhere!

Just as we thought we’d seen the worst, the fields got worse!!! First shin deep, cut hay and then the impassable nettles and thistles! Slowly we made the hike in what we thought was the right direction…

To put a long story short, we followed an embankment that we thought followed the river path we set out however this curved round (away from the river), but un-able to see for the bushes, thorns and thistles we carried on. It was only when we reached an abandoned airfield that we realised we were around 2 miles off course! In an in-the-moment decision, we altered our route and pick-up point. Still we went the same distance as we should have, but we finished 4 miles from the original finish!

Last weekend ( before I went on holiday) the York “Jamboree Scouts”  went to the Ebor District Cubs Its a Knockout competition. We sold teas and coffees to parents, and then burgers and hot dogs to the cubs themselves.

Fortunately, we had a marquee or 2 to keep our buns dry and the business kicked off (getting frantic at times) as the rain stopped.

Everyone had a great day, and it was another great fundraiser for our group!

I have now taken delivery of “York Jamboree Scouts” karabiner key rings (£2) and pens (£1) , and I will have unit 48 badges shortly, these can all be bought directly from me. 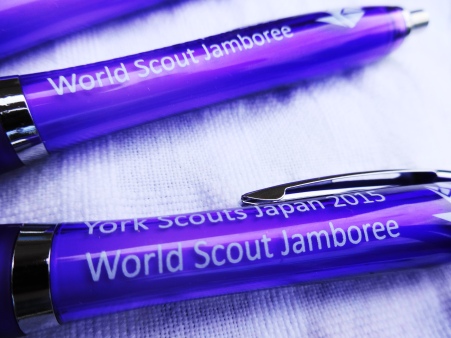 All Ready to Go!

The badges have been approved to be worn on uniform as a supporters badge, and are £2, everything bought is at great value for a great cause!

Last week me and a few other York scouts who are going to the Jamboree went to the Minster District Scouts AGM. Everyone had a great time and we sold loads of badges, and the karabiners went down great!  However as Minster District is a smaller District, we struggled to really get our raffle off the ground selling only 20 tickets (but every little helps). Overall it was a great evening and helped to raise awareness of our trip within the District.

This week I have done 2 events that I haven’t had the time to blog about individually and so will do 2 in 1!

It all started on Tuesday (Yes, I did miss the football) at the EBOR District Scouts AGM. Our main aim was to sell badges, carabiners and pens, as well as running a raffle. All of which were well supported and I can’t wait to do the same at the Minster District AGM which is this week.

At the AGM there was a speaker called Mike whom some of you may recognise from the programme: “Bear Grylls’ Island”. It was really great to hear of his story of survival and all of us learnt many new things about survival from someone who has experienced it themselves! The experience was so much worth missing watching the football!!!

Then today I went to Helmsley, to sell and race ducks, yes DUCKS!!! The unit had organised a Duck race to raise money for Unit funds, in which small ducks were released about 500 metres upstream of the centre of Helmsley, on the beck which runs through the town.

Unfortunately Helmsley beck runs through 2 very long tunnels, which is a problem and so to make sure no ducks were lost me and 3 other scouts followed the ducks all the way through around 200 metres of tunnel, crouching, and pushing the ducks that were stuck. (It was great to see light at the end!)

No animals were hurt in the making of this fundraising.

Last weekend, as you may have seen on my facebook page, me and a fellow “York Jamboree Scout” ran a small stall at the Bishopthorpe Fayre.

IT RAINED AND RAINED AND RAINED!!! however the Bishopthorpe public came out in force for such a rainy day, and we just about made  a respectable amount of money, even after being drowned! It was so wet I didn’t even get a picture but here’s a picture of the bunting ready to go!

So Thank you Everybody!

Unit 48 had another Unit training weekend recently. The weekend was full of laughter as we tie-dyed shirts, practiced a unit dance, made giant origami cranes and just generally had lots of fun. The torrential rain however, that only added to the excitement! (Even if our patrol shelter did fall over…)

We also worked hard as we knew we have very few Unit 48 meetings before our trip to Japan. We had a visit from a few Japanese people from Mitsubishi who told us more about Japanese culture. The talk was really interesting and we learnt a lot from it, including how to use chopsticks, give gifts and even how to ask for a McDonalds in Japan! 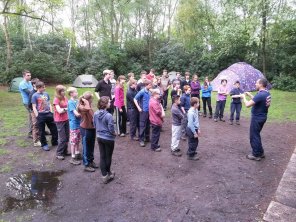 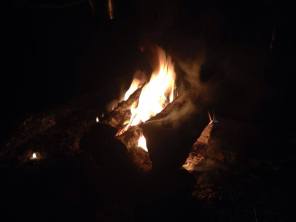 Drying out around the camp fire 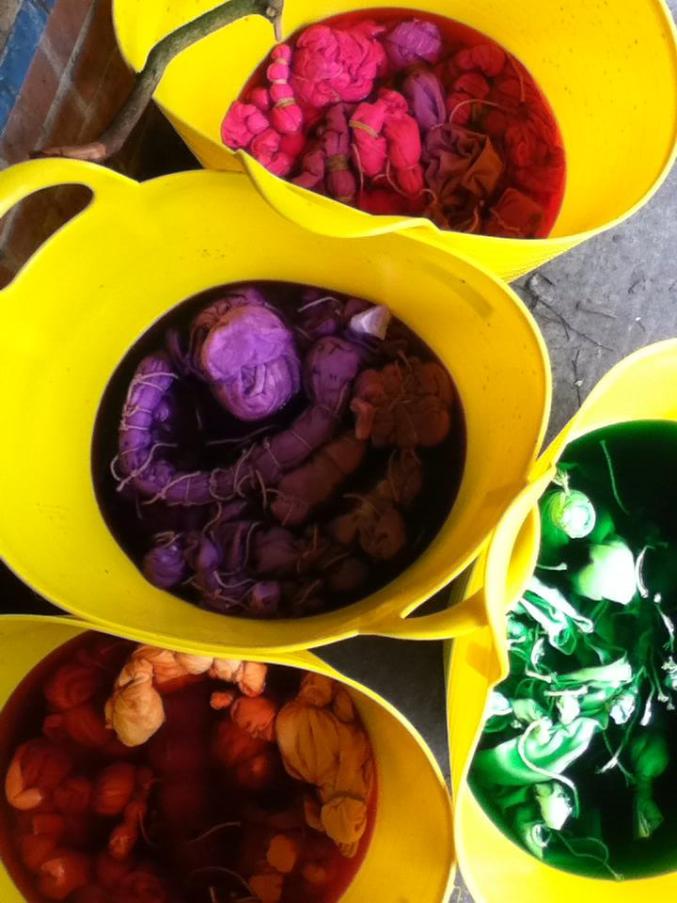 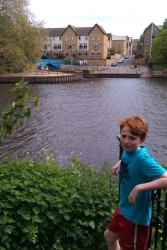 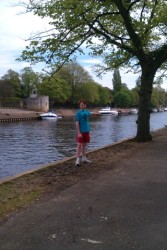 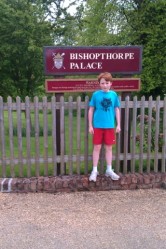 This weekend and Bank Holiday was the perfect time to do some fundraising! I started after school in the afternoon on Saturday by packing bags at  Foss Bank Sainsbury’s in York. I think I’ve made about £40 as the whole group raised around £600  (the money has yet to be counted twice, or thrice, or however many times they will count it!). On Monday, me and my mum completed stage 3 of our River Run. From Clifton to Bishopthorpe, we ran into the strong wind. However it still remained pleasant until the paths became rough later on, and the flies didn’t stop, I swallowed one! (one even voyaged into my eye!!!) and so it became a struggle to complete. However, eventually, we made it to Bishopthorpe where I eyed up some very attractive boathouses. One more run to half way!!!!! 😀

WOW!!! I’d love to thank all my sponsors for the great response and generosity to my cause!

I was amazed beyond belief when I saw how many people had supported me with so much money!

So far, the sponsorship total for my River Run is nearly £1,000. That is now spurring me on to run even faster, I cant wait to do the next one!

I will aim to contact everyone who has supported me individually but if you are an ‘anonymous’ donator I won’t be able to do this unless you email me at jamboeliot@gmail.com and let me know.

Not much of the mountain left to climb!

Well, I had been hoping to start earlier on my running so that this run wouldn’t be so early. But given we were in Switzerland, run 10 went on, and it was one of the best runs I have ever done!

So, at the beginning of last week, in the mountain town of Zermatt, me and my mum decided to go out and do altitude training, at 12,000 feet this was hard work, especially seen as the air was so dry! Later in the week, at lower altitude, we had descended into Zurich, my old hometown, where we stayed with friends who also became our first running partners for our 10.3km run. We ran next to the Zurichsee, the lake in Zurich, completing the trip in around 1 hour and 20 minutes, including photo stops!